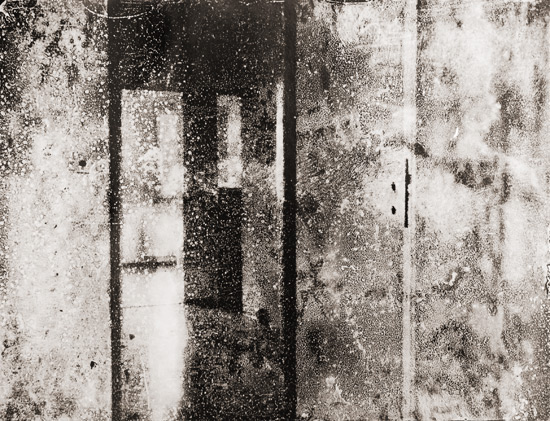 _Moscow Street is about the neighborhood “North” in Frankfurt/Oder, Germany. It was built in the 1970s. In 2002 the local government decided to tear it down completely until 2007. The decision was made after a long period of loosing people to other cities with a better economic situation. For people who grew up there, a return to the roots is going to be impossible.

_All pictures of this 50-picture-series were made on Polaroid 669 positive/negative-material. The camera used was an old Polaroid Land Camera Automatic 100. The 34 outside-pictures were taken 2003. The 16 interior shoots in 2004.

_Technique: After the development I left the chemicals on the negative. I dried the negative and made prints. The chemicals are going to destroy the negative slowly over the next couple of years. So every print I make is a unique print of the deteriorating negative.

_As tearing down of the neighborhood “North” was going on, it was and is accompanied by the deterioration of the negatives. The buildings were replaced by the memory of their existence. The pictures are a part of this memory, but the also show the vanishing process of memory.

_In 2007 the third set of prints was made. And a new aspect of the project emerged: Due to protests of the locals, only parts of the neighborhood are torn down. And the negatives somehow responded to this new situation: They showed different degrees of deterioration. On some of them there is almost nothing left to see, others still show a lot of details.

_And something else happened: Due to finanicial problems, as well as to the resistance by the locals, the process of tearing down the scheduled parts of the neighborhood Nord will now take until 2010. That means that the final set of prints will be made this year.

_Some of the memories are (going to be) completely blacked out over time. Others remain vivid. Some of the buildings even remain physically. And all of this is in the pictures.